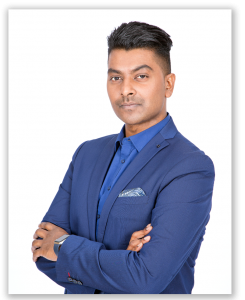 Powerful messages are being sent about the reality of the condition, conscientising people, and making a real difference in fighting prejudices

People who have the condition albinism have a complete or partial absence of skin, hair and eye pigment. It is considered a disability because of how it affects the person’s health. In Africa, people with albinism are subject to very poor treatment including discrimination and worse in some cases.

There still exists a strong feeling among many today that lighter skin is better. This is very sad, and it’s somewhat surprising then that people with albinism are marginalised in African society. South Africans have been guilty of colour discrimination. We are no stranger to the problem. In the case of albinism among African people, they are often rejected, poorly treated in school and the community, and their families even fear for the person’s life.

Just this year, a sangoma was charged with the kidnap and murder of two children with albinism. Shockingly, their bodies were to be used for muthi. The sangoma has been labelled a fraud and not a real practitioner of traditional African medicine and healing. Sangomas have struggled with a bad reputation because of those who use unethical and criminal methods. Most sangomas don’t do such things though.

Government and sangomas themselves are trying to address these problems, maintain professionalism, and fight criminal elements. Awareness raising about the facts of albinism is critical, but there has been staunch opposition. It’s quite frightening to experience this first-hand, as I have in trying to address sangomas on the issue recently.

Many also still believe that people with albinism and their families are bad luck or bewitched. People with albinism and other disabilities are often kept hidden away because their families are afraid. This is a problem in communities where they are thus not able to leave home, even to attend school, and they are often neglected in other ways too.

Emalahleni community outraged by the murder of children with albinism

However, in the murder cases mentioned above, the community was infuriated. They protested outside the court, and they wanted to deal with the accused sangoma themselves. The crowd was so angry that they wanted him dead, and police had to use rubber bullets to disperse them. It seems that some communities have no tolerance for such crimes against children, regardless of the disability the victims had.

Discrimination can start from birth for an African person with albinism. It is vital that we urge duty bearers to address the problem as comprehensively as possible. Education initiatives are being conducted, but there is ongoing resistance. People are still convinced that albinism is not a medical condition needing to be managed, but that it somehow warrants discrimination and maltreatment. If they attend school, it can be a very traumatic experience for a child with albinism, and it is fraught with challenges, including that they cannot spend much time outside, and that they are taunted and ridiculed by other children.

What is really great to see is that people with albinism are taking matters into their own hands and serving as activists to educate others and challenge prejudices. The African media has embraced people with albinism in recent years, especially in recognising their beauty. This may seem superficial, but the main site of contention in relation to many prejudices is the external. Certainly, the fashion world – where people with the condition are now sought after – can be shallow, but it is really making a difference in people’s views, even by the mere fact of drawing attention to them and thus valuing their appearance. 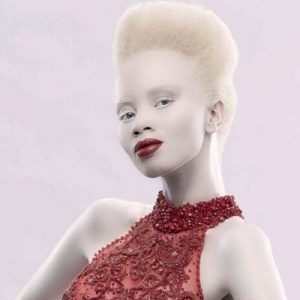 Modelling is a prestigious occupation which focusses heavily on one’s looks. Thando Hopa is a South African model with albinism who is making waves worldwide. She has modelled for skincare brand Vichy, and Audi no less to promote their vehicles. She first appeared in Marie Claire in 2012, then in Forbes Life Africa in 2013. She has had a busy career as a model. Last year she was featured on the cover of Marie Claire, and she is also in the 2018 Pirelli calendar.

While this is awesome, one wonders why it hasn’t happened sooner. The truth is that people with albinism and other disabilities have been so marginalised, even to the point where they fear leaving their home. Their families fear for their safety or are embarrassed. They may thus tend not to encourage the person to have a career, certainly not one in which they are exposed, such as in modelling. It seems that Thando Hopa has overcome these challenges, however, and family support is one of the factors in her success.

Thando isn’t just a pretty face; she’s a qualified lawyer. Modelling is her part-time occupation, which she is using to conscientising people about albinism. Seeing Thando on the cover of a major fashion magazine and in ads for Audi does make a big impression, especially on the youth. Fashion houses and magazines are the authors of many people’s views on all manner of topics.

Thando’s beauty shone from the inside out on the newsstands of thousands of shops visited by South Africans on a weekly basis. The power of this cannot be overemphasised. Even those who are prejudiced and who don’t read magazines, or hardly go online were confronted by the cover image. Marie Claire called this 2017 issue “The August Power Issue” with the tagline “Meet South Africa’s incredible future shapers”. Her being on Marie Claire – with her gorgeous blonde ‘fro, little black dress, and XL WAIF earrings – was not easily ignored when one passed the newsstand. She really stood out, and that sent a potent message to South Africans everywhere.

Thando isn’t the only model or professional with albinism shaking things up. South African Refilwe Modiselle is said to be the country’s first female runway model with albinism. Supermodel Shaun Ross from the US has appeared in two Beyoncé music videos.

Let’s keep spreading positive, truthful messages about albinism, be aware of their safety and how they are treated in schools and communities, and support artists and activists with the condition. We can overcome stigmas surrounding disabilities and integrate everyone into a happier, more united society. After all, disabilities need not keep us down; it’s how we react to them that matters.